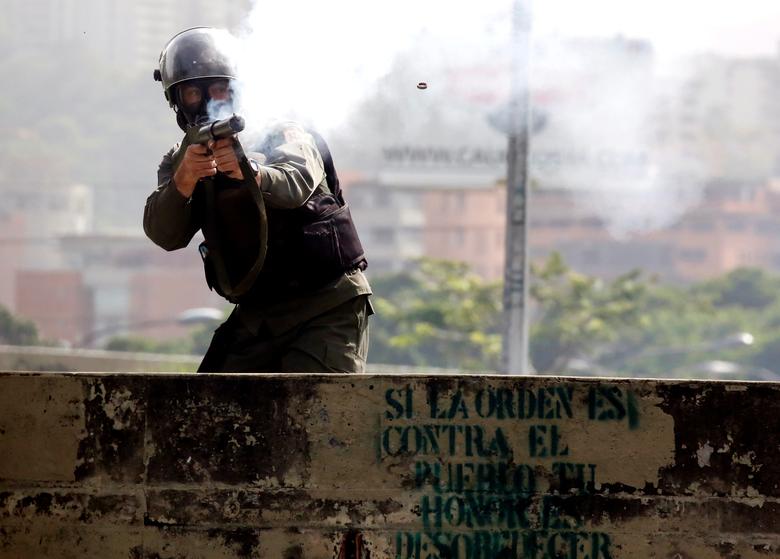 A member of the security forces fires his gun during clashes at a protest against Venezuelan President Nicolas Maduro’s government in Caracas, Venezuela. The graffiti below reads “If the order is against the people your honour is to disobey“. REUTERS/Carlos Garcia Rawlins

Galvanized by the release from jail of hardline leader Leopoldo Lopez, Venezuelan opposition supporters on Sunday marked 100 days of protests against a socialist government they blame for political repression and economic misery.

Thousands of people gathered in an east Caracas square to hear opposition figures including the wife of Lopez, Lilian Tintori, speak.

Many protests have ended in clashes between masked youths and security forces, with more than 90 killed, hundreds arrested and thousands injured since the unrest began at the start of April.

“We’re not giving up. That Leopoldo is home fills us with the strength to keep fighting,” said Maria Garcia, a 54-year-old homemaker clad in a white T-shirt bearing his image, as she gathered with friends at the rally.

While Lopez was at home with his two young children, Tintori, who has campaigned for him around the world including during a meeting with U.S. President Donald Trump in the Oval Office, said she was relieved to have her husband home but the fight was not over.

“I can’t say I’m happy when we know our country is suffering, when there are children eating out of the trash, when there is no medicine in Venezuela,” she said, surrounded by opposition legislators.

She added that former foreign minister Delcy Rodriguez as well as her brother Jorge Rodriguez, another Socialist Party heavyweight, had escorted Lopez to his home at 3 a.m. on Saturday.

Lilian Tintori, wife of Venezuela’s opposition leader Leopoldo Lopez, who has been granted house arrest after more than three years in jail, poses with supporters outside their home in Caracas, Venezuela July 10, 2017. REUTERS/Andres Martinez Casares

Lopez, 46, was sentenced to nearly 14 years in jail on charges of inciting violence during 2014 protests against President Nicolas Maduro that led to 43 deaths.

But he was surprisingly granted house arrest and sent home due to what the Supreme Court called “irregularities” in his case and for health reasons. Lopez looked robust, however, when he later appeared to supporters.

The government seems to be calculating that his return home may ease domestic protests and international censure, but opposition leaders are viewing it as vindication of their strategy and have vowed to step up their street tactics.

For more than three months, tear gas, rubber bullets, rocks and petrol bombs have flown between protesters and security forces in hotspots around the OPEC member nation.

While foes slam him for incompetence and failed socialist policies, Maduro blames an “economic war” against him by pro-opposition businessmen and Washington.

The opposition and government are on a political collision course this month.

The opposition is organizing an unofficial referendum on Maduro next weekend, after which they are promising “zero hour”, a presumed reference to an escalation of tactics that could include a general strike or march on the presidential palace.

Maduro, in turn, is seeking to create a new super body called a Constituent Assembly, which would have powers to rewrite the constitution and dismiss the current opposition-controlled legislature, via a July 30 vote.

Campaigning for the parallel assembly began on Sunday, with red-clad supporters cheering on Socialist Party leaders in Caracas.

“It’s the only immediate path we Venezuelans have to overcome violence, hatred and intolerance,” Rodriguez, the former foreign minister who is running for a seat in the constituent body, said on Sunday in a TV interview.

Maduro’s foes are boycotting the July 30 election, saying it is a sham designed to keep an unpopular leader in power.