DO SEE OUR NEW WEB SITE

DO MAKE USE of LINKS,

the battle against drugs is ongoing and over the centuries largely a failure.

Various societies have taken different approaches to the use of drugs over the muillenia, consider the popularity of CAT in various middle eastern and African societies where it is considerred an acceptable norm in some coumntries, others consider it a legitimate export and yet others punish its use – just as is the reaction to alcohol around the world, where every shader of opinion is held – wines and vintages are venerated in France, America merely boosted sales & crime with prohibition, Islam has banned it and most Governments serve it in its canteens and bars in their Parliament buildings, even in some cases subsidising it!

There will always be a side to the argument, and with some merit, that legalising drugs and then controlling the quality with the aim to protect citizens whilst taxing the various drugs to profit the state may well be the eventual answer. People will always find a way around a ban and surely education is the best tool in control – education which could well be funded from the taxes levied on drugs. 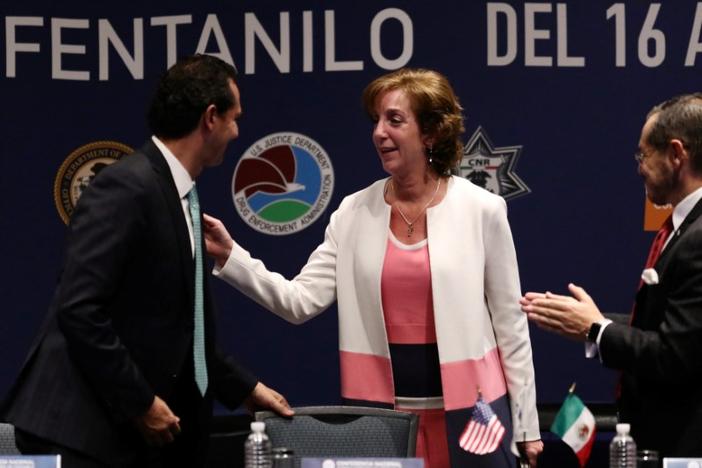 Roberta Jacobson, U.S. ambassador, speaks with Alvaro Vizcaino Zamora, Executive Secretary of the National Public Security System, during the Inauguration of the National conference about the opioid Fentanyl, in Mexico City, Mexico, May 16, 2017. REUTERS/Edgard Garrido
By Anthony Esposito | MEXICO CITY

The United States and Mexico pledged to step up efforts to beat the growing threat of fentanyl, a synthetic opiate up to 50 times more lethal than heroin blamed for the deaths of thousands of people in recent years, including rock star Prince.

A U.N. body in March added to an international list of controlled substances two chemicals used to make fentanyl, which the United States said would help fight a wave of deaths by overdose of the painkiller.

The Federal Commission for the Protection against Sanitary Risk “is finalizing revisions to the laws that will add these precursors to the list of controlled substances in Mexico. We encourage the rapid approval of these reviews,” U.S. Ambassador to Mexico Roberta Jacobson said in Mexico City on Tuesday as a two-day conference on fentanyl kicked off.

Over 33,000 people died in the United States in 2015 from opioid-related overdoses, including heroin or fentanyl, a 72 percent jump from a year earlier, Jacobson said. Among last year’s victims was music superstar Prince, coroners said.

“Current trends indicate that this figure will rise in 2016 and 2017,” Jacobson said, underscoring that halting the trade in opioids and other illicit drugs is “a No.1 priority for my government.”

During the conference, U.S. and Mexican law enforcement and regulatory agencies will share best practices for the detection, identification, analysis and management of fentanyl with Mexican forensic scientists.

The scientists are also being trained on the protocols for handling and storing fentanyl, as ingesting or absorbing even small amounts through the skin can be lethal, experts say.

“In Mexico, so far in 2017 we have executed four seizures of this substance in different forms,” said Elias.

The head of counter-narcotics at the U.S. State Department, William Brownfield, estimated earlier this year more than 90 percent of the heroin currently consumed in the United States comes from Mexico, along with most of the fentanyl.

Brownfield said fentanyl was being trafficked by the same organizations moving heroin and other opioids from Mexico into the United States, but emphasized that most of the fentanyl entering the United States originated in China.

To view the original of this article CLICK HERE

All unanswered messages are recorded.

Leave your name & a UK land line number & I will return your call.

DO MAKE USE of LINKS,

Please Be Sure To